Blog
You are here: Home1 / Blog2 / HEALTH + LIFESTYLE3 / The Workout Diary of A Middle-aged Woman: Week 1 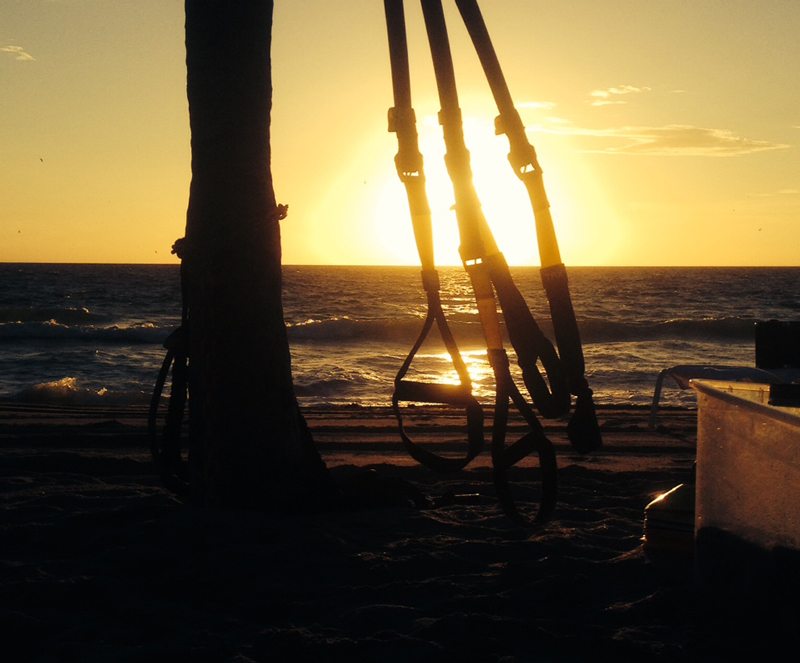 I’ve watched early morning, after early morning how the men play in the sand, running exercise drills and sweating their ass off. I watched and admired how they kept coming back every morning and most importantly I watched how their bodies changed; their progress was easy to track since most of the guys lose their shirts early into the workouts and really that’s a beautiful thing ; )

Secretly, I’ve wanted to join in and for whatever reason I just hadn’t. Now, I know the reason, it’s because it looked reeeally tough! But then my friend said she was doing the workout, so now what was my excuse? Being the only girls we paired off together but never were we made to feel any less than the rest of the men nor were we excluded in any way on the contrary. “There are modifications for everything, go at your own pace but we all do it together” said Christopher Vlaun trainer extraordinaire. I thought I would be reeeeally embarrassingly bad at it and die, kidding. I thought I would feel powerless, instead I felt empowered. You see I have been strengthening my body through yoga but that hadn’t been enough to get into the shape I dreamt of having for once in my life, if not now then when? It had already been suggested that I switch up my workouts but for months I didn’t do much more than the usual yoga and except for maybe walking more. So, I stepped it up and joined the BeFit Method workouts on the beach.

The morning of my first workout I was so excited to be participating, finally being a part of the workout that everyone is talking and writing about (http://www.v-artofwellness.com/2013/08/24/the-future-of-fitness-v-art-of-wellness-in-departures-magazine/). The warm-up exercises came easy thanks to yoga. Next came the fun part, running deceivingly simple drills with not a lot of equipment but with a whole lot of results and that’s what I AM after. So my favorite place in the world the beach- so sunny, so calming, so relaxing, had become a place where I started to drop a lot of “F” bombs and where I would be forced to process a few things: So this is what age feels like, so this is what I had allowed my body to become and oh man this is what it feels like to be heavy! Heavy not just some much in weight but more in the sense of how much effort it takes to do everything like jump or run in the sand it’s as if you legs are made of lead. Heavy energetically maybe? But with lots of encouraging and sincere high fives how could I beat myself up? Two things were said that morning that stuck with me. The first surprised me as I overheard one of the men say, “This is tough” and another replied, “If everything was easy, we wouldn’t need to be here” and I thought “wow even these in these guys, who are in shape and regulars at this find it tough.” Woah score a point for little old moi!

For the second workout I was a little less hard on myself. I had committed to doing the workouts, I hadn’t been so sore from the first day, and in reality it had been fun so there I was back out on the beach only this day I was a little less self-conscience, certainly more compassionate with myself. I was reminded of the way my ex “the coach” used to describe his best basketball players as the one’s who always play with “heart” aka guts, it takes guts just to step out on this beach with these men and attempt this extraordinary workout. Score another point for little old moi!

It was during my third day of the workout when I realized that if I just gave my best at that moment, with whichever exercise drill we were doing that’s all that really counted. When I took one exercise at a time I wasn’t so overwhelmed by the thought of the whole workout. I found that I had to give a lot of effort and energy to finish each exercise but I also had to rest in order to get ready for the next one. At one point I found myself bent over, hands on my knees, sweat dripping from my face, breathing so heavy, sucking wind, struggling just to try to catch my breath and just then I looked up and saw that everyone else was in that same stance. Ha! I’m not alone!

Each workout ends with a series of conscience movements and it was at this moment, on the third workout in a week, on the beach that I love, while grounding through my breath that something in me clicked. I remembered the second statement from the first day, the one that went straight to my soul…

“Once you get past your mind, there’s a whole treasure for you to discover of what you are capable of doing”

And that’s when I got it, covered in sand, sweat and heart, of course, I was flowing i.e. as in feeling, sensation, the true benefit of these hard workouts is the vibration I was feeling throughout my body similar to that ”yoga high” but a lot more intense. So when Chris asked, “How do you feel?” “Awe-some!” was my reply and I reeeeally meant it. BAM! My own personal three-pointer at the buzzer for the win… Go moi! Bring on week two!

Follow Me!
Who Said That Soy Is Good For Us?