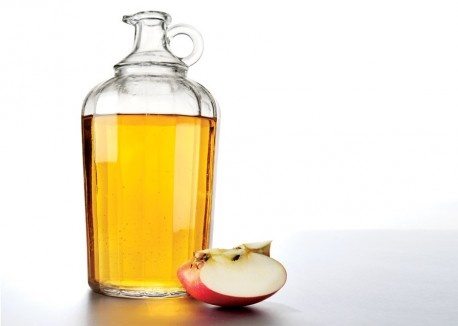 Since the beginning of recorded history, apple cider vinegar has been used as an effective medicine to remedy a wide variety of ailments. The ancient Greek physician Hippocrates, for instance, was known to treat his patients with apple cider vinegar and honey for serious digestive conditions. Christopher Columbus would store barrels of apple cider vinegar aboard his vessels to guard his sailors from scurvy. Even the feared samurai warriors of Japan often relied upon apple cider vinegar to maintain their strength and stamina.

Despite its considerable medicinal uses, however, apple cider vinegar – which is made by fermenting the sugars from apples – has more uses than most people realize. Its cosmetic benefits are especially impressive, and give us even more reasons to stock our shelves with this gold-colored tonic.

Many people dislike applying commercial shampoos to their hair, and for good reason. These unnatural products, which are almost always comprised of harsh chemicals and other unpleasant ingredients, often strip our hair of its natural oils and leave it feeling dry, brittle, and lifeless.

Fortunately, apple cider vinegar makes a fantastic natural alternative to commercial hair care products. Aside from being a potent antibacterial, antifungal, and antiviral that can disinfect the scalp of harmful microorganisms, apple cider vinegar can unclog hair follicles, maintain pH balance, and even strengthen hair shafts by closing their cuticles. This leaves our hair feeling cleaner, stronger, shinier, and healthier.

To use apple cider vinegar as a shampoo, mix one-quarter cup of it with one cup of water and pour the mixture into an empty squirt bottle. Next, spray your hair and scalp with the mixture, allow it to sit for between three and five minutes, and then rinse it off using warm water.

Apple cider vinegar is also good at improving the health of our skin for two reasons. Firstly, its acids can help “digest” our dead skin cells, thus triggering a cell turnover in which a newer and more vibrant layer of skin replaces the older layer. Secondly, apple cider vinegar (whose pH seldom exceeds 3) helps restore our skin’s natural acidity, thus improving its complexion and decreasing its susceptibility to environmental pollution.

Interested in using apple cider vinegar to improve your skin? Simply mix one-quarter cup of it with one cup of water and spread the mixture over the desired area with a cotton ball. You can also fasten the cotton ball to warts and other skin protuberances overnight using a Band-Aid; the protuberance should fall off in the morning.

When diluted with water, apple cider vinegar makes for a fantastic mouthwash due to its ability to regulate calcium metabolism and eliminate tartar deposits. Moreover, it is well-known for removing surface stains on teeth, making them look whiter and healthier.

After brushing your teeth, add one teaspoon of apple cider vinegar to a small glass of water and swish the mixture around your mouth for between 30 and 60 seconds. After spitting the mixture out, swish your mouth out with some plain water to remove any lingering residue. Please note that undiluted apple cider vinegar should never be used as a mouthwash, since its acidity can cause our enamel to erode over time.

Studies show that olive oil benefits our heart and mind

Documentary Film Explores the Enormous Price We Pay for Ignoring the Need for...
Scroll to top