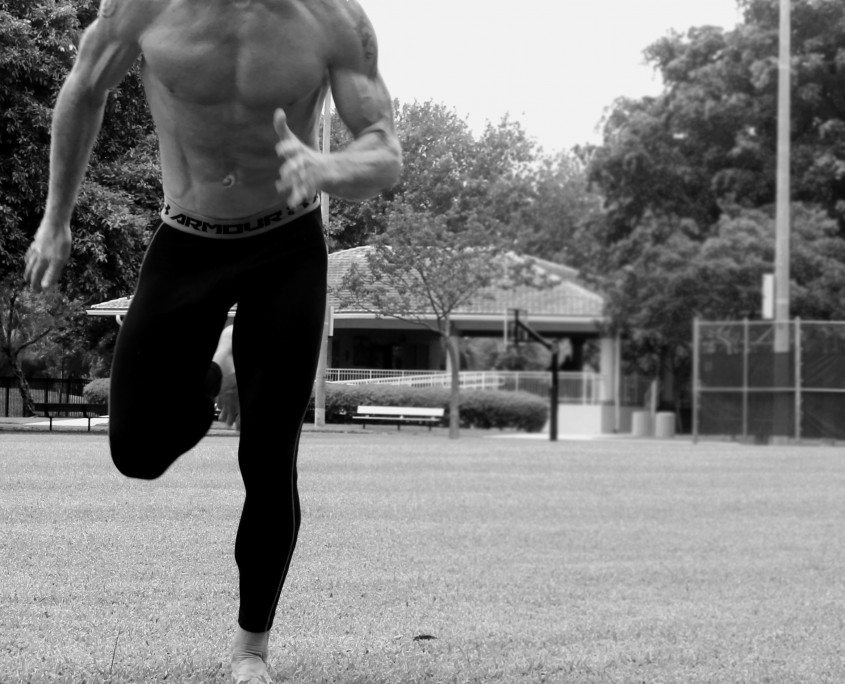 So – after recently welcoming a newborn son, time has become extremely limited. With consideration that I must find a way to still fit in some intense workouts, sprint work has been my 2x a week got-to workout. Now take a second and think about the guys and girls who were the most ripped (i.e. lowest amount of bodyfat relative to the amount of lean body mass carried) In football, running backs, wide receivers and defensive backs. On the track, sprinters who ran events 400m and shorter. I have to admit, that I have noticed many significant benefits over the last six weeks. Here is a quick list of the most dramatic changes:

Since sprinting over the last six weeks I have noticed some significant gains in my peak power. I can jump further and higher with more frequency, hence increased power endurance. Studies have shown that seven weeks of sprint training (2-3 sessions per/week) enhanced maximal sprint-peak power, lengthened time to exhaustion at maximal sprint-exertion, lowered blood-pressure, and increased incremental VO2 peak during exertion in healthy male subjects.

Think about running 100 meters, you are taking roughly 55 – 65 steps. A world class sprinter would take roughly 44 – 47 steps. Those steps taken at a very aggressive rate in combination with constant tension and maximal power output. Now all that aggression and relaxation is triggered from the core in response to the ground force reaction. Now think about the abdominal activity related to this movement. How do you reveal this abs? The more sprinting you do while decreasing your body fat percentage, the more toned your abdominals will appear.

When thinking about burning fat you need to think about metabolism. First, high-intensity sprint work increases the rate of metabolism  during the activity and well after. Yes, that means you are still burning it up hours after your done. So consider this a great one/two punch. Sprinting burns the fat layer off while simultaneously building up and developing the muscle underneath. Have you heard about EPOC? EPOC is (excess post-exercise oxygen consumption): The after burner – Many people believe that doing low-intensity exercise for a long period of time burns of the most amount of fat. Although your body uses about 50 percent of your calories from fat during low-intensity exercise, the number of calories you burn is much lower than that of high-intensity exercise, which uses about 90 percent of its energy from glucose. Some studies have shown, the effects of EPOC from doing sprinting and other high-intensity exercise will help you burn fat after exercising.

For me recently, time is everything. Since having a newborn, my time has been mostly occupied by dirty diapers, washing bottles rocking the baby to sleep – if I’m lucky I will find success… So going for a 5 mile run is not an option, but banging out 10 x 110m bursts, sprints, or pick-ups (strides) with 90 seconds rest is doable. Now that can be accomplished in about 20 minutes or less. I don’t know too many people who can tack on a five miler in less than 20 minutes (hence a 4 minute mile pace). The other thing to consider is the maximal output repeated 10 times. Thats like doing 10 all out sets of abs and more with just 90 seconds rest. Yes, thinking of it that way seams like a beast of a workout – thats because it is! All in 20 minutes or less, you are reaching an aerobic and anaerobic threshold. Basically gettin’ it all in under 20 min.

Begin with a dynamic warm-up:

Chris and Tracie Vlaun Featured in Bloomberg
Scroll to top