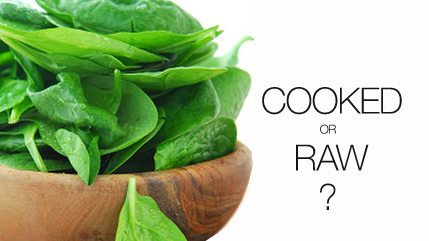 How much of your food should be cooked? Proponents of the newly popular raw food diets claim that cooking ruins vitamins and enzymes, making food difficult to digest and therefore contributing to disease.

All the traditional peoples cooked some or most of their food. Even in the tropics, where people did not have to build fires to keep the food warm, they built fires every day to cook. In addition to cooking grains and legumes, they usually cooked their vegetables, the very foods some recommend to people to eat raw.

Why cooking? Cooking, helps neutralize many naturally occurring anti-nutrients and irritants in food, also breaking down indigestible fiber. Many foods, such as beans and potatoes, are indigestible until cooked.

While cooking, especially at very high temperatures, does destroy some nutrients but it makes minerals more available and it increase the antioxidants; a surprising benefit of cooking is the fact that it makes proteins more digestible by gently unfolding these large molecules so that the digestive enzymes can latch on and do their work.

For example, if you cook a tomato you will be losing 1/3 of the vitamin C it contains but the amount of available antioxidants increase of a 75% fold. Another problem in eating raw vegetables is that they are high in hard to digest fiber cellulose which will negatively affect your digestion, some are high in oxalic acid which bond with calcium and may lead to kidney stones or low bone density. People suffering of any gut related issues should avoid eating raw vegetables and fruits.

Though cooking does destroy enzymes, many foods we cook do not have many enzymes to start with. Consuming lacto fermented condiments, foods and beverages will more than compensate for enzymes lost in cooking.

Interestingly, all traditional cultures consumed at least some of their animal foods raw. Cooking destroys vitamin B6, derived from animal foods, and greatly reduces milk’s nutrients.

It is important to freeze meat for 14 days before using according to the USDA, to ensure that parasites are completely destroyed. Fish to be eaten raw must be marinated in lemon for several hours, equally effective for getting rid of parasites.

We should eat most of our food cooked, especially vegetables, grains and legumes but as traditional cultures did, we should consume some of our foods raw. I think we have so much to learn from the wisdom of past generation, I believe using that wisdom applying to our modern times would allow us to reach such potential that we do not even know, not only in sport or fitness. I think taking any concept or philosophy to the extreme is never the right choice so my answer to eating more raw foods than cooked foods my answer is as always moderation.

When beginning a new exercise routine…..

What do you enjoy in your juice???

Are you eating Healthy????

What is Vibrational Energy?
Scroll to top