Great Coverage of the hottest trend of yoga and fitness mash-ups. Chris and Tracie Vlaun headline the article with their Aeroga Movement system.

A new wave of aggressive yoga classes incorporates cardio, CrossFit, and even boxing to get fitness results.
by
James Gaddy
January 9, 2017 at 12:47:00 PM EST

As a model working in South Africa in the early 2000s, Tracie Wright Vlaun started doing yoga along with her fitness regimen to help her deal with the mental toll that the fashion industry can sometimes inflict. “To let go of all the BS,” is how she put it. But she eventually wanted something “less Om-chanty,” and set about to create a workout that would blend poses into a more intense session.

By 2009, she and her trainer husband Chris Vlaun had devised a regimen that included entry-level yoga poses and bodyweight exercises grounded in the “fundamentals of ancient movement art disciplines.” Aeroga, the name of the duo’s high-energy workout offered at Florida’s St. Regis Bal Harbor Resort, is a seamless mix of power-based calisthenics set to a choreographed playlist that ranges among Adele, U2, Stevie Wonder, and Bach. It has taken off by word of mouth, attracting Miami tourists and a few athletes as well as the owners of the teams the athletes play for. “It’s going to kick your ass,” Chris Vlaun said. Read Full Article >>

We have recently had the pleasure to get some workouts with a professional baseball player and Miami local George Barber. He had some great things to say about his experience, so we wanted to share with our friends. 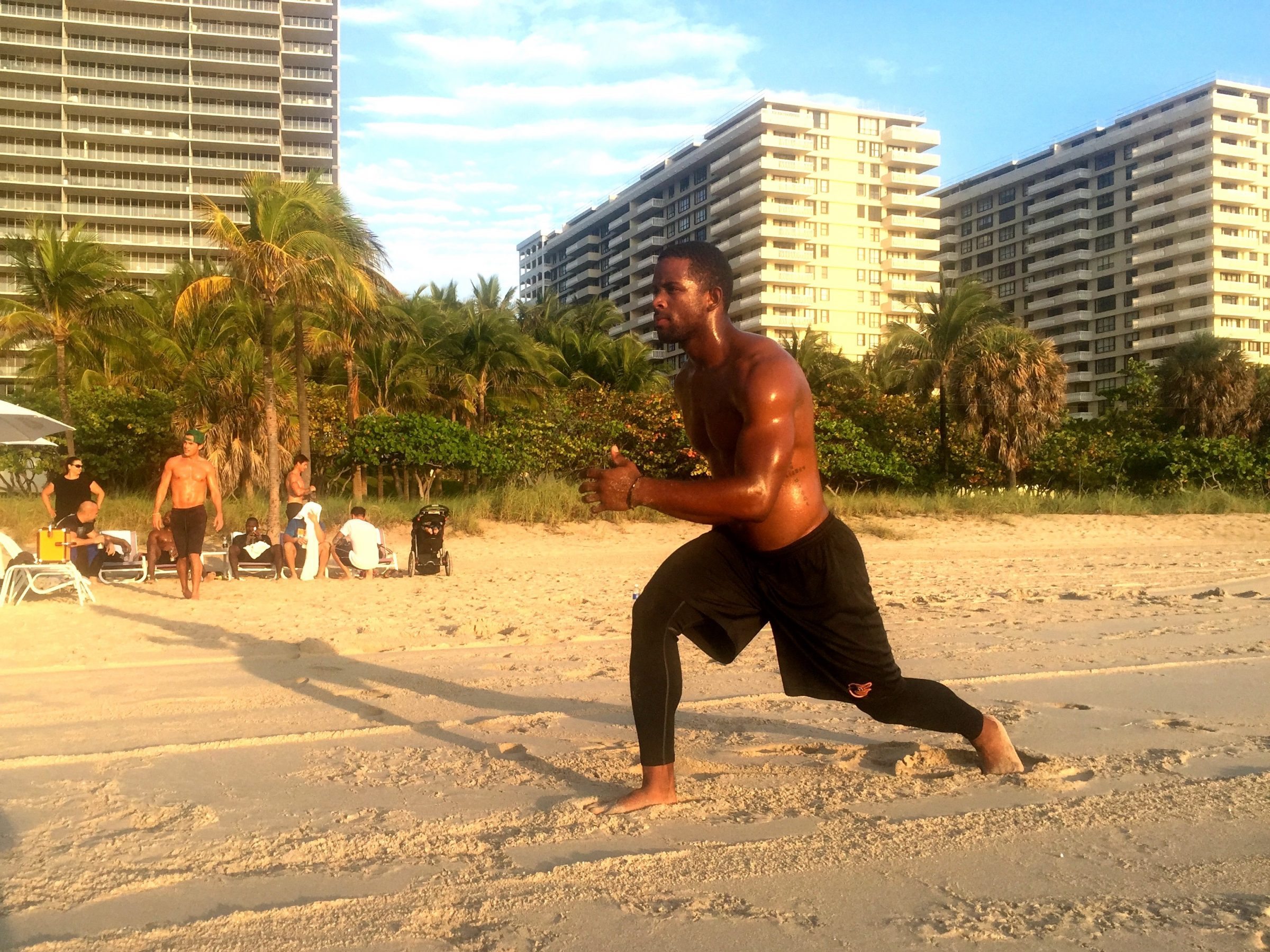 “Thanks for the workout!

Here’s a little testimony – Having been through high school, college, and professional strength and conditioning programs, none of them have provided the “experience” that V Art of Wellness has. Chris and Tracie have introduced a new level of fitness to me, a perfect blend of intense focus and “true strength” developing body movements. Chris’s workouts challenges you to get the most out of your body, training the body and mind to be efficient and perform at optimal levels.Tracie’s Aeroga pushes you past your mental and physical limitations, incorporating a mix of yoga and high intensity workouts that breeds balance, focus, and body strength. As an athlete and avid fitness follower, I can attest that both workouts are unlike anything I’ve experienced. Seeing how applicable they are to my craft and life is truly exciting. I genuinely believe that Chris and Tracie aren’t selling a product, but rather sharing a lifestyle that aids in a better quality of life mentally and physically, fit for any and everyone.”

Fitness experts often say you should mix up your workout routine. That is easy for Larry Levy. The 69-year old restaurant executive has a workout to match each of the cities he frequents.

BLOOMINGTON, Ind. — A study of more than two metric tons of North American, South American and European salmon has shown that PCBs and other environmental toxins are present at higher levels in farm-raised salmon than in their wild counterparts.

Researchers at Indiana University and five other research centers say increased toxin levels in farm-raised salmon may pose health risks to people who eat the economically important fish. Their study, which appears in this week’s (Jan. 9) issue of Science, is the most comprehensive analysis to date of salmon toxin concentrations.

“We think it’s important for people who eat salmon to know that farmed salmon have higher levels of toxins than wild salmon from the open ocean,” said IU School of Public and Environmental Affairs Distinguished Professor Ronald Hites, who led the study.

The production of farmed salmon has increased 40-fold over the last two decades, thanks in large part to the world’s salmon farms. Over half the salmon sold globally are raised in Northern Europe, Chile and North America.

While the health benefits of eating salmon have been established by numerous studies, concerns about the fish’s tendency to accumulate toxins have gone largely unaddressed. As fish-eaters themselves, salmon occupy fairly high positions in their food chains. As a general rule, carnivorous animals tend to have higher concentrations of toxins in their bodies than herbivores.

For comparison, the researchers collected samples of five wild Pacific salmon species — Chinook, Coho, chum, pink and sockeye — from three different regions in North America. The researchers did not study farmed Pacific salmon or wild Atlantic salmon because fish from the two groups are difficult to obtain.

The researchers analyzed the concentrations of 14 organochlorine toxins in salmon from each collection site, using gas chromatographic high-resolution spectrometry. The toxins they studied were polychlorinated biphenyls (PCBs), dioxins, toxaphene, dieldrin, hexachlorobenzene (HCB), lindane, heptachlor epoxide, cis-nonachlor, trans-nonachlor, gamma-chlordane, alpha-chlordane, Mirex, endrin and total DDT. Many of these toxins, including PCBs, dioxins and toxaphene, are “reasonably anticipated to be a human carcinogen,” according to a recent report by the U.S. Department of Health and Human Services.

Only PCBs, dioxins, dieldrin and toxaphene were used to calculate consumption safety guidelines, because the researchers deemed these four toxins to most strongly impact human health.

The researchers also found that toxin levels in European farm-raised salmon were significantly higher than in North American or South American farm-raised salmon. Levels of PCBs, dioxins, toxaphene and dieldrin were highest in farmed salmon from Scotland and the Faroe Islands (Denmark) and lowest in farmed salmon from Chile and Washington state, though Hites pointed out that even these comparatively uncontaminated South American salmon had high levels of other toxins.

Hites and his colleagues also measured toxin levels in “salmon chow,” a mixture of ground-up fish and oil fed to farm-raised salmon. They found a strong correlation between the toxicities of chow and salmon, suggesting toxins are passed into the salmon from their feed.