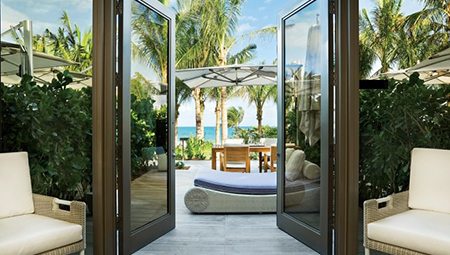 Location is everything, and at the world’s best resorts a serendipitous setting puts them leagues ahead of the rest. Consider the St. Regis Bal Harbour Resort, situated on Miami Beach in South Florida’s esteemed Bal Harbour enclave. To the east lies the ocean, mere metres beyond the resort’s pool. To the west, a few footsteps away, is the highest-grossing mall per square foot in North America and one of the last family-owned shopping centres in the nation: Bal Harbour Shops. Sandwiched in between the pinnacle of beachfront and the finest of boutiques sits the St. Regis, where art, design, fashion, and tradition intersect.

Open since January 2012, the Bal Harbour property is a Starwood resort, and 28th in the long line of St. Regis establishments. It reached AAA Five Diamond designation within just three months of opening, the only hotel in Miami Beach to have done so within that time frame. Naturally, the general manager can be partly applauded for this, and here that is Marco Selva, a gentleman of pure style, a man who even “hiked a Mexican pyramid with me last year in Gucci driving shoes,” according to public relations director Michelle Payer.

Follow Me!
V Art of Wellness Mentioned in Travel + Leisure