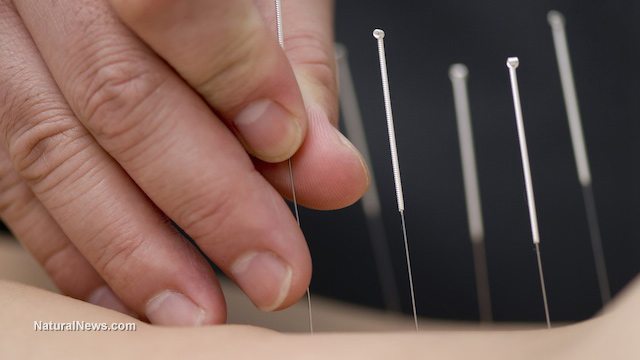 (NaturalNews) There are many alternative treatments that have been considered (and still are) as quack medicine by the all-seeing and all-knowing conventional medical model. However, as science and results began to prove their legitimacy, conventional wisdom was forced to acknowledge their efficacy. Acupuncture needles are one of those treatments that have gone from quack science to proven medical device, and scores of people are now experiencing its benefits.

In the 1960s, Professor Kim Bong Han and researchers in Korea attempted to prove the existence of meridians in the human body using microdissection techniques. They found evidence of an independent series of fine, duct-like tubes corresponding to the paths of traditional acupuncture meridians.

Fluids in this system sometimes flowed in the same direction as blood and lymph, but also traveled the opposite direction at other times. They realized that these ducts are different from the vascular and lymphatic systems that Western medicine had identified, and that meridians themselves might exist within them.

This meridian system was further validated by a French researcher, Pierre de Vernejoul, who injected radioactive isotopes into the acupoints of humans and tracked their movement with a gamma imaging camera. These isotopes traveled 12 inches along the acupuncture meridians within four to six minutes.

Vernejoul then challenged his work by injecting isotopes into blood vessels in random areas of the body rather than acupoints, and found that they did not travel in the same way at all, illustrating that meridians do contain a system of separate pathways within the body.

In 1997, acupuncture gained official credibility with the FDA reclassifying acupuncture needles from “experimental” to “medical device,” thereby acknowledging that it is a safe and effective medical instrument. In the same year, the National Institutes of Health (NIH) released a statement endorsing acupuncture for a variety of conditions.

The electrical component of acupuncture

Current research suggests that there is a specific relationship between acupuncture points, meridians and the electrical currents of the body.

In the 1970s, Robert O. Becker, M.D., and biophysicist Maria Reichmanis were able to prove that electrical currents did flow along the ancient Chinese meridians and that 25% of the acupuncture points existed along those scientifically measurable lines. They reasoned that these points acted as amplifiers to boost the minute electrical signals as they traveled along the body and that the insertion of a needle could interfere with the flow and block the stimulus of pain.

The World Health Organization has noted over 40 conditions that acupuncture can treat, including:

Acupuncture has also been found to be effective in the treatment of a variety of rheumatoid conditions and brings relief to 80% of those who suffer from arthrosis, or osteoarthritis. There is also evidence that it can be used in the treatment of environmentally induced illnesses due to radiation, pesticide poisoning, toxic compounds and air pollution.

Even in acute abdominal conditions such as appendicitis or kidney stone and gallstone attacks, acupuncture can be used before further progression necessitates surgery.

Acupuncture is also considered a valid veterinary medical procedure used mainly for surgical anesthesia and alleviation of chronic pain. It has been shown to be effective in relieving symptoms in 84% of animals suffering from arthritic pain and other degenerative joint diseases.

Sources for this article include:

The Benefits of Intermittent Fasting

Natural Sun Protection From the Inside Out

Simple Natural Remedies to Help You Combat the Flu

Avoid Burnout With The Anti Routine.

Ancestral Diets – A Lighter Shade of Paleo
Scroll to top